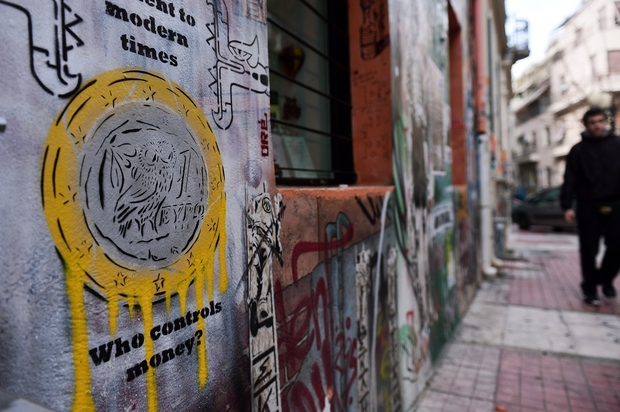 Donald Tusk’s announcements of an “Agreekment,” where EU members have agreed to another bailout package, should be celebrated. What should not be celebrated is a demanded streamlining of pensions and more privatization for a country already pinched by austerity.

It was British Prime Minister Margaret Thatcher who famously said, “The problem with socialism is that you eventually run out of other people’s money.” Such a line, though wonderfully clever, is painfully reductive (though also very useful given the political aims of Thatcher’s government). When compared to the policies of real democracies, which from America to Scandinavia employ both effective and ineffective forms of social welfare, the idea of “other people’s money” makes no sense. The effectiveness of economies is measured by the liquidity of funds, not by the degree to which resources are pooled. But Maggie’s likeness of socialism as the flaky flat mate of monetary policy remains quite popular – particularly when we look at modern day bailout packages.

When observing the rhetoric of pro-austerity politicians, one often sees an attitude about Greek bailouts akin to thatcheristic claims against government programs in 1980s Britain. In both cases, analysis of data proves second to an ideological distaste for people who appear dependent on subsidy rather than seeking financial independence through individualistic, work-oriented principles. Economic hardship both in the 1980s and today has pushed the idea of “private good, public bad.”

Many newspapers (and not just in Germany) have alluded to the notion of a lazy, entitled, ouzo-guzzling Greek citizen, waiting for more IMF money as he sits around and does nothing to improve his situation – a stereotype that a third bailout is not likely to eradicate. It allows many to embrace a tale of Northern European frugality triumphing over Southern European siesta spending (though this ignores the debts of Iceland, Ireland, and other non-Mediterranean countries that have faced debt and recession). Such a mentality discourages analysis of the various economic problems infecting many institutions in Europe. In its place is a concocted portrayal of struggling Eurozone members reimagined as your dodgy friend from university who owes you rent despite taking an impromptu holiday in Croatia.

This construct, though not always outlined so explicitly, is implied in all forms of private media, which through a desire to sell stories has capitalized on nursing European prejudices not just against inefficiencies among Mediterranean bureaucracies, but also against the very notion of subsidy. Such ideas have helped fuel support for overly applied austerity tactics, and attacks on social programs that are crucial to helping many get through long periods of unemployment, recession, and crippling debt.

It’s ironic that in times of economic crisis, where more often than not the primary culprits are revealed to be over-valued private institutions, the finger of disapproval gets pointed at the welfare state. We ideologically shun subsidy during the times when it is actually most needed. In the case of Greece, bailout packages become structured by the empathy or lack thereof from the populations of EU member electorates rather than based on meaningful structural data. It wasn’t the doings of the average Greek citizen, but indeed corruption of both public and private institutions that led to the financial fraud and economic collapse that has now landed on the backs of everyday Greeks.

March of the austere

In defense of those who have supported austerity, especially in the early days of the Eurozone crisis, there is obviously a case to be made that it can be well intentioned. If a country that is broke wants the help of creditors beyond it’s borders, then dramatic monetary reform is inevitable (especially because many of Greece’s creditor countries are also on shaky financial ground). It’s sensible that another sovereign state would not want to extend a loan to a Greece, especially absent evidence that the indebted country has made meaningful structural changes to help repay its debts and regain the economic agency. That, however, is a practical concern that can be meaningfully addressed without reducing macroeconomic policy to individual character, or generalized cultural values.

Greeks too are not without their own prejudices, with their media eager to portray Angela Merkel as an economic tyrant flying around Europe like a Valkyrie, ready to strike down whomever she deems to be below a Germanic standard of excellence. Granted, many of Merkel’s PR-coordinated interactions with world leaders, finance directors, and Germany’s national football team have also done their part to perpetuate this notion, and to her own political advantage.

Still, given that the third bailout has already been approved, what is the value of considering the effect of such generalized attitudes at this stage in the game?

The answer, simply put, is that the policy of austerity is fueled in large part by cultural distrust. When the state becomes the tangible manifestation of a country, its culture, and its economic shortcomings, then it is the state that is disproportionately forced to pay for the failures of private (and often multinational) enterprises within its borders. Reducing structural problems within integrated institutions to simplified cultural caricatures distorts how we view this problem, and inevitably distorts our choices on how to fix it.

Money has to stay on the move for economies to remain strong. If the EU truly is a unified economic entity, then money should be diverted to where its movement is under threat, perhaps without attaching debt to it. The decisions that will inevitably decide whether or not countries like Greece will remain in or depart from the EU should be based on this and other economic realities, not on social pressures driven by semi-thatcherite notions of individual accountability. We are not running out of other people’s money. Rather, the money isn’t running.

It’s easier to reduce problems to individual values because it more closely resembles our immediate social lives, but it’s not the way markets work. What’s harder is to cast these ideas aside and address such problems absent the warm reassurances that even a little bit of xenophobia can provide. Most important of all, it’s extremely hard to see how irrelevant the economies within a given political border are when compared to the international flow of capital. No country should be forced by another country to defund its social programs, especially in times of economic difficulty.

Greece’s problems are far from over. EU policy is also far from practical. To make aid to Greece as meaningful as possible, leaders and citizens alike need to stop looking at this as Greece’s problem and instead look at it as everyone’s problem.