Why Marxism fails in the Eurozone

Yanis Varoufakis dubbed himself an “erratic Marxist” and presented his interpretation of Marx in detail. But his dialectical spirit is unlikely to succeed. 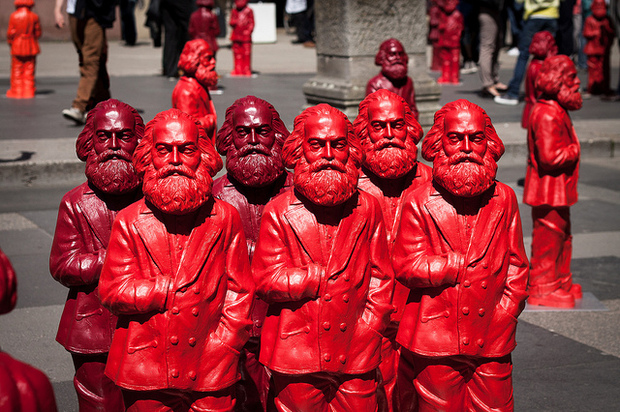 Karl Marx’s dream has come true: Europe is suffering in a long recession and some European capitals are under siege by indignant citizens. But are we really on the brink of disintegration of the capitalist system due to its own contradictions as Marx hoped for? Nothing seems more utopian at the moment. After all, Marx’s contemporaries often shared a laugh about his excitement for financial crises. Today, even the Greek Marxists from Syriza do not believe in the end of capitalism. In fact, the Troika reigns over the Eurozone with the latest bailout conditions strangling Syriza’s proposed social reforms.

After numerous negotiation all-nighters in Brussels, the smoke clears – but the Eurozone battlefield appears to look much like it did before. On the one side of the entrenchment, we find the vicarious Wolfgang Schäuble, who stood his ground in the face of the anti-austerity heretics Alexis Tsipras and his Finance Minister, Yanis Varoufakis. The Greeks on the other side are flooded with debts that threaten to drown Athens’s efforts to redeem the “humanitarian crisis” in their country. The crisis does not seem to have worked in favour of Marxist politics.

Contrary to their vows before negotiations, last Friday the Syriza-government opened its doors to the much-hated Troika once again. The Eurozone round has presented Syriza with a take-it-or-leave-it proposal that was then signed last minute. “Expend and pretend” – the extending of human suffering through downsizing of public spending, and pretending that the debt will be repaid one day – might become Athen’s companion in misfortune for decades. Does this not amount to a final submission to “fiscal waterboarding”?

Syriza as good interpreter of the crisis

One of Marx’s most famous sentences is: “Philosophers have hitherto only_interpreted_ the world in various ways; the point is to change it.“ Under the immense pressure of the Troika, the Greek government has turned this wisdom upside down. On the one hand, Syriza seems to be a good interpreter of the crisis. In fact a lot of officials share Varoufakis’s economic analysis of the debt crisis. From the onset he has said that only a cancellation of debts could help Greece to stand on its own feet again. Even German government economists agreed. Meanwhile Greece remains in a debt limbo. But Marx’s thinking was more complex than calling for revolution, and so is Syriza’s strategy.

Yanis Varoufakis, who dubbed himself an “erratic Marxist”, has presented his interpretation of Marx in some detail recently. He remarks how Marx taught him the dialectical insight of “joint production”; the simultaneous manifestation of “debts and surpluses, of growth and unemployment, of wealth and poverty.” Put bluntly, under capitalism, you can’t have your cake and eat it. Wealth is produced collectively (by the factory worker, the office clerk etc.), but almost exclusively enjoyed by a few. This insight in mind, what does Varoufakis make of the present blackmailing of the Eurozone crisis?

In his dialectical spirit he shows us how everything is “pregnant with its opposite”. Or, in other terms which he used after the last agreement with the Greek creditors: “We’re beginning to be co-authors of our destiny”. Varoufakis’s hope is that the anti-austerity stance of Syriza will now equally be inscribed in the agreements between the Eurozone and Greece. As little as Syriza’s propositions are actually taken into consideration, the party has opened a political imaginary among leftists that gives hope and breathtaking support to other movements like Podemos in Spain. Syriza’s discourse has made the political arena less technocratic and more passionate. Wolfgang Schäuble has already complained that since Syriza is in power, he is often portrayed as merciless. Indeed, this hardly amounts to a revolution.

Asking for the impossible

But what would be the alternative for Greece? In his book “Infinitely Demanding”, Simon Critchley, a New York based philosopher, suggests that in order to topple capitalism, people should ask the impossible. Bombarding those in power with unrealizable demands (translated to the Greek case: total cancellation of debts, calling for complete nationalization of industries etc.) would result in mounting discontent and finally the disintegration of capitalism. This is hardly convincing, especially with regards to the Greek case. Policy-makers, such as those in the German government, are usually little impressed by impossible demands and rather follow IMF chief Christine Lagarde’s favourite mantra of “implementation, implementation, implementation”.

Varoufakis is therefore prepared to “avoid the revolutionary maximalism that, in the end, helps the neoliberals bypass all opposition” and re-negotiate with its “partners”. He is hoping that his partners will not be the same after the current struggle. After the presentation of the latest reform plans of the Syriza-government, including an assault on the unions, it might as well be the other way around.

Jasper Finkeldey is a PhD student at the University of Essex and a freelance journalist. He studied Politics and Theatre at universities in Hamburg, Bochum and Paris before moving to England to focus on Political Theory and Organization Studies. Finkeldey is a former editor of the European Magazine Cafebabel.com and has also written for the German newspaper “taz” and “The Conversation”.