American politics seem at least to critics like Bernie Sanders corrupt and money driven. Today of all things the rise of Donald Trumps proves the contrary, says Stanford’s Francis Fukuyama in this interview with Alexander Görlach 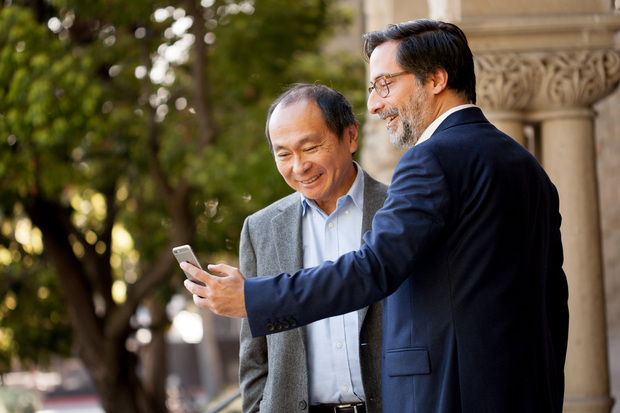 Görlach: Mr Fukuyama, let me begin by asking you about your perspective on the state of the EU -how do you perceive the state of the European Union in the verge of the refugee crisis?
Fukuyama: Two weeks ago I was in Germany and had a number of discussions about the current events. Before going there, I assumed there was a well-worked out plan of doing things – and there wasn’t one, and still isn’t one. I understand why it is hard to reach a consensus on the EU level. But I don’t understand why Germany has not made public an agenda of how to deal with the situation. Ultimately, this will be bad for the EU – there is such a fundamental divide not only between Germany, but amongst European states. Add the possibility of the Brexit and you have a very difficult time ahead.

Görlach: Also the growing influence of Russia and Turkey must seem very alienating – does this seem like a cold-war era balance again? Or is it different this time?
Fukuyama: I never had any illusion that either one of these countries we’re part of the European Idea, so I don’t think it is surprising that they are behaving the way they are. Russia had this moment where they seemed to move toward European values, but this now has changed. It’s turned into a very nationalistic, almost isolated country. And in a way, Erdogan has been doing the same.

Görlach: But if Merkel comes to a plan to solve the refugee crisis, she would have to tackle the reason why people flee…
Fukuyama: …and that has started to some extent with the ceasefire. Having said that, it will take years until we really see a change in migration. Countries currently do not have the leverage to bring about peace, and even when Syria will return to peace, there are plenty of states that we have to worry about, still. The other big problem in Germany, though, is that they have taken up more refugees than they we’re able to take up, and they have a way to stop the flow into Germany.

Görlach: The idea was to disperse them across all of Europe, though!
Fukuyama: But that will not happen – the utter lack of solidarity across Europe means that everybody will provoke the right-wing backlash that ultimately will be more dangerous than the refugee crisis itself. Economically and physically, one can find places for migrants. Politically, however, Europe has not had a good track record when it came to absorbing Muslim populations into its political systems.

Görlach: But how do you tackle the moral dilemma? Europe is not only an economic entity, but in regards to human rights and the history of Christianity across the continent – to name but a few – Europe is also pretty clear on its values.
Fukuyama: It’s a matter of political realism. There are things we all want to do but we simply can’t. In the long run, costs may be undermining populist movements and splitting societies, and that won’t be worth the price to pay. Every single person I have talked to in Europe is really worried because of political problems down the road.

Görlach: What is the US’ role in this crisis? Does the American withdrawal of support to Europe seal the deal on Europe’s chaotic fate?
Fukuyama: No, I don’t think it will. Looking back, I think America could have stopped this crisis, assuming Obama had a clear policy on Syria and would have thrown Assad out of power back in 2011. The argument is that it’s an act of omission that would have avoided a crisis. But I don’t think that America is withdrawing from Europe – just think about the strong response toward the Crimean Crisis. Together, the US and Europe came up with sanctions that nobody had even thought were possible!

Görlach: Looking at the Libyan crisis, where France had its mouth wide open but needed America to follow through on threats and ultimately the intervention, do you think that Europe needs the support of the US to survive on a constitutional level?
Fukuyama: For the past 40 years US leaders have been hoping for Europe to take more responsibility and action, and in Libya, Britain and France were willing to do that. However, for Obama to retrospectively blame the British and the French for not being able to follow through with their words and ask America for help – as he did in a recent interview with The Atlantic – is also irresponsible on our part.

Görlach: It is not a secret that US and Europe have many shared values, though within Europe the British and French seem to align more with the US than the Germans and Italians do – especially in regards to the use of force. It shouldn’t have been a surprise to Washington that Europe was not united on the matter of intervening Libya.
Fukuyama: It wasn’t the use of force that was controversial – it was the nation-building aspect. In Libya, the same mistake was committed as the one in Iraq. You can’t topple an authoritarian dictator without having a solid plan of how to fill the power vacuum immediately afterwards.

Görlach: And now, with ISIS outside Tripoli, the threat to Europe has not reduced at all. To what extent is a unified worldview, such as portrayed by ISIS, a threat to societies such as our European one, which does not look into the future united?
Fukuyama: My theory was always a theory about modernization. There are outlined processes that have shown how countries have come from poverty into wealth. Karl Marx said that the endpoint of this journey is communism, and many social theorists have believed that for a century and a half. As of now, it does not look like it will be communism, but rather liberal democracies with market economies. But even in our societies, the political system and order is not perfect. Modern institutions are fragile, they are not compatible with basic traits of human nature – for example the favouring of friends and family over others. Hence, there is always a possibility that a modern state decays into an elitist oligarchy that is ruled through family connections. And one could say that this is already happening in the US as we speak.

Görlach: Obviously America has these structures – the Clinton family, the Bush family, and so on and so forth. Access to the political system is heavily weighted towards connections.
Fukuyama: But that’s not entirely true. Jeb Bush entered the race for candidacy with his last name and one hundred million dollars plus the favoritism of the American republican elite. However, the rise of Donald Trump, as obnoxious as it is, has shown that connections aren’t everything, and sadly money plays an outsized role in American politics. It undermines the legitimacy of the system, but actually what money can buy – I believe – is limited.

Görlach: Do you think that Donald Trump’s rise is a desperate attempt to re-communicate American exceptionalism to its people?
Fukuyama: No, Trump is getting his support from the middle class that is conscious about social equality in a way that was present in the 1970s – and that was a truly exceptional epoch in American history. You had a highly productive economy, relatively low inequality, a homogeneous country because immigration was cut off. It’s the hollowing of the middle class in combination with both Republican and Democrats’ failure to establish a social safety net the way we see it in Europe that is giving Trump all this support he now has.

Görlach: But then again you can argue that Europe is seeing this phenomenon too – we have, especially in central and southern Europe, rising popularity of either right- or left-wing extremist parties that have a huge nationalist youth supporting it.
Fukuyama: Except that the actual social status in America is a lot worse than in Europe. Today in America, 70% of working class children are growing up in single-parent families. There is an epidemic of drug addiction in some states – New Hampshire for example – that is very much worse than anything that is happening in Europe. Here, the Democratic party has drifted off into identity politics, environmental politics, and so on; the Republican party has actually concretely added to economic problems by their policies on immigration and free trade.

Görlach: But then, one could argue that fear is the decisive factor across both sides of the Atlantic.
Fukuyama: Yes, but that shouldn’t surprise anybody. Elites in both places have not performed too well. Here, they have allowed the erosion of manufacturing to occur, and they really mismanaged the expansion in the 2000s that contributed to the financial crisis. In Europe, the elites created the Euro, which in retrospect was not a good idea. It’s not as if Elites have been running a great cruise.

Görlach: Interesting – why the Euro as an example? Because in theory the idea of the Euro was beneficial to all of Europe.
Fukuyama: A lot of economists at the time said that if you don’t have a united fiscal policy and just unified the monetary systems, it would be a recipe for disaster, and they turned out to be correct. If Europe had a structure in which German citizens would be willing to bail out the Greek tax payers spending money that they had never really earned, then sure. Nobody would deliberately want the sequence of events that actually happened. Which doesn’t mean that the idea of Europe was a bad idea. If you look at the history of wars, you will find plenty of examples on that continent – until recently. Having a European Idea, whether or not this was a creation by elites, was good. The idea of the Euro as a shared currency, however, was not.

Görlach: How can we come up with something encouraging in Europe rather than being exposed to a rhetoric of fear and decay?
Fukuyama: There will not be a universal solution to this huge problem – you have to take one problem at a time. Figure out a way to secure the external borders, restore some of the internal controls. As far as the economy is concerned, countries themselves have very distinct objectives they want to reach. Italians want to eliminate their informal economies, the Germans are way ahead of them…

Görlach: …but in terms of narrative – as it is the 20th anniversary of Samuel Huntington’s “Clash of Civilizations” – that is the reigning narrative now, right? At least in Europe, the struggle against Islam seems to be the case.
Fukuyama: There are ideological differences between the West and Islam. I think that we oversee some issues though. There is a fight internally in Islam between people who want a more liberal way of life, and naturally there’s an opposing side to them. Iran is a showcase example. After their return to Islamic fundamentalism after the revolution, the majority of information we receive is that Iranians really hate it and want to return to a more liberal and loose society. Now they have the opportunity to re-engage with the West. It’s not helpful to think about civilizational conflicts. We adopt new ways of thinking, generations after generations. People are trying to create dangerous narratives on both sides, be it nationalist or religious fundamentalist.

Görlach: Mr Fukuyama, thank you for your time.

The American political theorist is best known for his influential book „The End of History and The Last Man“, in which he argues that the spread of liberal democracies and Western capitalism would bring about the final form of human government. Fukuyama was a key contributor to the formulation of the Reagan doctrine and the neoconservative agenda. He is currently a Senior Fellow at Stanford’s Freeman Spogli Institute for International Studies.