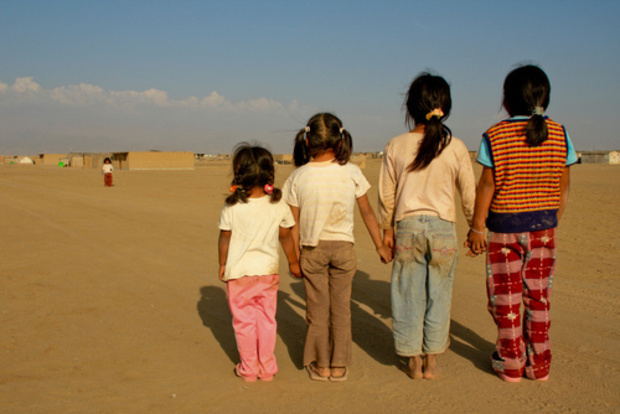 We owe Froebel the kindergarten. While we can possibly refrain from Froebels pathos, we can not ignore the encompassing concern of society for our offspring. A fifth of children and youth in Germany, below the age of 18, are currently at risk of impoverishment. In different German states, such as Bavaria or Baden-Wurttemberg the rate is below 12 %, in federal City States, East Germany and in parts of North Rhine-Westphalia above 25 %. Data of the European Office for Statistics show a steady increase.

In the year of 2006 one and a half million children in Germany below the age of 16 were affected by impoverishment. Their number rose to approximately 1,7 million within nine years. Child poverty exists particularly often within the single-mother community, within families that have many children and non-native German families. According to the German government about 29.000 children and youth are currently living without accommodation.

No tolerance for hardship!

The consequences of child poverty are devastating and their impact can last a lifetime. Poverty often creates conflicts, stress and anxiety. Those factors can influence the child’s health, as well as his/her personal development. Children from impoverished families have less of a chance for a good education or a well-paid job. Poverty is embarrassing at any age. Not only for the individuals affected, even more so for a society that tolerates child poverty. We cannot neglect the guiding principle that our children should have a better future!

Indeed, the current administration does not seem to share the strong apprehension I feel for our children in need. According to chancellor Angela Merkel, “Germans never had it as good as today.” The current coalition agreement, a volume of 134 pages, does not mention the term “child poverty”, once. In my opinion, political will is lacking, right there. The “education and participation package” is a bureaucratic monster, and often appears exclusive. Andrea Nahles, the German Federal Minister of Labour and Social Affairs, finds child poverty to be a “depressing phenomenon”, but denies higher social security benefits simultaneously. Social policy experts are not enthused by the recent revaluation of social security standard rates, calling them ineffective.

The “National Poverty Conference”, the German Child Protection Agency and other welfare organizations demand, “No more excuses! We need to fight child poverty.” These organizations expect to have an action plan implemented that mentions child poverty in the respective political platforms of the parties, in the coalition agreement, and in potential legislation, including a deadline for the eradication of child poverty on a national level. This action plan needs to be long-term, multi-dimensional, and financially viable. Short-term action is needed pretty much everywhere right now: child benefits should quickly rise to 328 Euros, that would match the tax relief, top earners already gain from child allowance. Urgently needed are basic security benefits for our children. Maintenance advance needs to be raised and prolonged. In addition to more qualified personnel in our state agencies. Those are investments into the future!

We can eradicate child poverty within five years

With my party, DIE LINKE, we are planning on establishing a five-year-plan to end child poverty in Germany. We find this to be an appropriate and manageable time frame for a worthwhile and absolutely vital goal. I initiated a network against child poverty within the faction, a coalition for the cause build with charitable organizations, scientists, practitioners, and public personas from arts and entertainment.

Politics can refrain from pathos, but simply do not work without the practice of empathy.

Dietmar Bartsch was born in 1958, studied political economy in Berlin and earned a Doctorate degree in Moscow. Since 2015 he is leading the faction of DIE LINKE, THE LEFT with Sahra Wagenknecht in the German Parliament, the Bundestag.