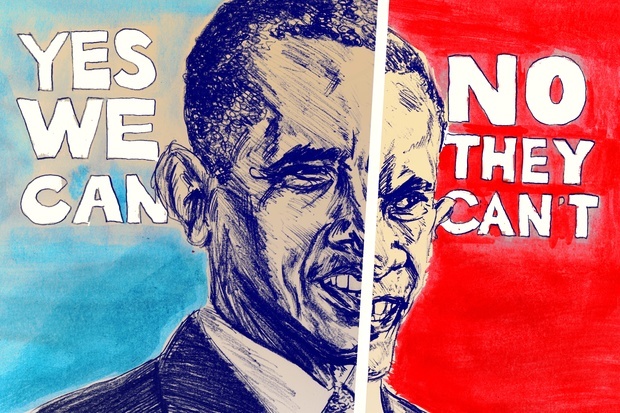 The psychological constitution of a country and a society partially reveals itself through that which we commonly call “public discourse”: The process of publicly exchanging praise and criticism, of collective celebration and mourning. After the tragedy at Sandy Hook, for example, a whole nation found itself confronted with the challenge of making sense of everyday violence, of processing the traumatic experience, and (eventually) of thinking about remedies. The collective grief was well visible on President Obama’s face. When he stepped in front of the microphones, he appeared to speak not only as president but also as the father of two girls who, for several minutes, absorbed the emotions of a country that was scared to discover its darker underbelly.

Like few other events during Obama’s first term, Sandy Hook temporarily sidelined partisan politics and allowed outsiders a glimpse at America’s self-perception. The ebullient bravado after Osama bin Laden’s death might have been another such example: A closing chapter after a decade of terrorism and the War Against Terror that often blurred the lines between good and bad. The impromptu celebrations can certainly be read as America’s attempt to compensate for its own insecurity with an added touch of don’t-fuck-with-us jingoism.

The last real cause for celebration was in 2008. Obama stepped onto the stage in Chicago to celebrate his electoral victory. In Boston, bus drivers parked their vehicles in the middle of the streets, partially to join the fun and partially because the nightly crowds had made regular traffic impossible. Obama took his oath of office, and generations of Americans celebrated and wept on the National Mall in DC.

Of course the image of a nationwide sigh of relief is misleading: Like most bipartisan elections, the 2008 campaign wasn’t exactly a landslide (53% to 46% of the popular vote). But it certainly felt like a historic event. To many Americans I talked to, 2008 seemed to promise a new, better, more hopeful and more tolerant America. And ven those who disagreed with Obama’s campaign slogans recognized the symbolic significance of his triumph. 53 years and one month after Rosa Parks refused to surrender her seat on a Montgomery bus, the first African-American president moved into the White House. What an achievement for a country whose history cannot be separated from the history of slavery and racial segregation! For centuries, America’s ideal that “all men are created equal, that they are endowed by their Creator with certain unalienable Rights” carried a footnote that limited its promise. No more, it seemed. For America’s psychological constitution, 2008 was an important year.

One prejudice that Europeans seem to hold about the United States is that race isn’t a topic of public conversation. Having lived in the US for five years, I beg to differ. Americans discussed at length whether Obama’s race had an impact on the 2008 results (the answer: it probably did in some parts of the country). Several magazine covers became entangled in heated discussions about real or perceived racism. Countless articles laid out America’s relationship with its troubled past and present – the best of which probably flowed from the pen of Ta-nehisi Coates, a wonderfully talented writer at “The Atlantic”, whose article “Fear of a Black President” offered some of the most sophisticated analyses of contemporary American discourses about race.

In the judicial and legislative realm, race-related issues continue to stir up controversy. This spring, two hallmarks of American postwar legislation – the Voting Rights Act and the affirmative action principle – are being challenged before the US Supreme Court. The argument in both cases is (to put it crudely) that America has overcome its past and must abandon favorable treatment of minorities (or, in the case of the Voting Rights Act, the federal government must cease to patronize certain Southern counties because of their history of structural racism). As Chief Justice Roberts once remarked in his Parents v Seattle School District opinion (2007), “the way to stop discrimination on the basis of race is to stop discriminating on the basis of race.”

Arguably, the appeal of race-blind policies has gathered steam since 2008. Obama’s electoral triumph emboldened all those who regard racism as a legacy of the past, as something to be studied in history class and hence suitable as a topic for dinner discussions. Charges of contemporary American racism are discussed and denied, not punished with silence.

Yet the discourse on race also illustrates the limits of trying to judge a country by its public debates alone. Looking only at the visible and audible signs of self-reflection is about as comprehensive as attempting to judge the American cultural canon by focusing exclusively on the written words of Mark Twain and David Foster Wallace.

Depending on whom one asks and what one looks for, the United States are united in name only. Even long-time politicians like the former Democratic senator Russ Feingold warn that the political climate in Washington has become steeped in vitriolic rhetoric. While Congress remains in partisan gridlock, the social and economic divide in America continues to grow. The middle class, frequently invoked as the product of the American Dream and as proof for the country’s social mobility, is shrinking. The number of Americans on food stamps reached a record high at the end of last year. Poverty rates have spiked since the beginning of the current economic crisis. After the United States encountered widespread social precariousness during the Great Depression (the last period when the social question was posed with comparable urgency), one consequence was the radical expansion of the welfare state, loosely modeled on European social democratic governance. Now, the welfare state – arguably one of the great achievements of the 20th century – is being carved up and hollowed out. At the same time, rising costs for college education, health care and retirement savings outpace the growth in real wages (on average, real wages have increased only four percent since the 1970s).

The US is one of the world’s most prosperous nations, and also one of the most unequal. No other Western democracy has to shoulder as much economic inequality as the US, which is wedged between Venezuela and Uruguay in global inequality rankings. And despite countless statistical and anecdotal indicators, most Americans refuse to talk about the elephant in the room: The fact that middle class aspirations have become a poor framework to describe the social realities of America.

The Marxist aftertaste of class-based rhetoric remains strong and, to the American political palate, unpleasant. Yet one doesn’t have to embrace all of Marx’s writings to see the practical effects of discursive blinkers: That-which-cannot-be-named is inextricably related to many discussions which dominate the American political landscape today. It frames the question of why African-Americans are disproportionately reliant on social services, why they commit a disproportionate number of crimes, receive disproportionately harsh sentences and are less likely to escape from poverty. It features in the observation that social mobility in the US has steadily decreased since the 1970s and that children from poor backgrounds fall ever farther behind their better-off peers in academic assessments. It’s hard to talk about those phenomena without talking about class, and about the pernicious effects of class discrimination.

The decline of Fordist industrial capitalism in the US does not imply the irrelevance of class. It still matters in whose interests a country is governed, and who can benefit (realistically!) from the liberal trifecta of economic growth, education, and equal opportunities. It’s a fallacy to believe that all people essentially desire the same things: Too often, politics isn’t the process of building consensus but the business of managing differences.

But instead of confronting the increasing socioeconomic divide head-on, and instead of addressing the problem of America’s growing underclass, the political establishment seems to cling to the rhetoric of the famed “middle class”. The American Dream is strong with this one – and it’s not politically opportune to ask why racial minorities have secured the right to sit in the front of the bus but remain relegated to the periphery of the city and of public consciousness. It’s much easier to talk about race than it is to talk about class.

One counter-argument to class-based analyses goes like this: Race is an innate feature (and thus cannot be used towards discriminatory ends), but social status is malleable. Yet this argument only works on the empirical assumption that society hasn’t become ossified. It only works if one’s background does not define one’s destiny. But if there’s any statistic that can deflate the American Dream, it’s this one: Children born into the top quintile of the US income scale have a 40 percent chance of maintaining their social status. Children from the bottom quintile have a four percent chance of making it to the top. Social mobility has too often turned into social entrenchment.

Political change presupposes the articulation of societal problems. Those who lack words to articulate their grievances also lack the tools to exercise their agency. Berthold Brecht, one of the great German writers and playwrights of the 20th century, put it thus:

There are some who are in darkness,
and the others are in light.
And you see the ones in brightness,
those in darkness drop from sight.

Which brings us back to contemporary US politics. In his second inaugural address, Obama declared: “We, the people, understand that our country cannot succeed when a shrinking few do very well and a growing many barely make it.” But he could not quite force himself to utter the c-word beyond fleeting references to “the middle class”. It’s hard to see how a country could “make real the promises of democracy”, in the words of Martin Luther King (from whom Obama quoted at length once again), without confronting the shadow areas of its political discourses.

In Europe, many of us like to imagine that American presidents achieve their place in history by virtue of their foreign policy achievements. That might be true in some cases (think George W. Bush), but the legacy of most presidents remains tied to their domestic agenda: Roosevelt’s “New Deal” or Reagan’s “government is the problem” rhetoric are just two examples. These two presidents left a mark not only on their own party but changed the consciousness of a nation. Four yeas hence, Obama’s legacy will partially depend on the tangible achievements of his recovery programs – and partially on whether he can address not only the ghosts of the past but the blemishes of the present.

Martin Eiermann is Editor-at-Large at The European. From 2010 to 2013, he served as the magazine’s Managing Editor and Assistant Editor-in-Chief. Martin studied history, political theory and sociology at Harvard University and at the London School of Economics. He currently resides in Berkeley, CA, where he is pursuing a PhD in political sociology. Follow him on Twitter