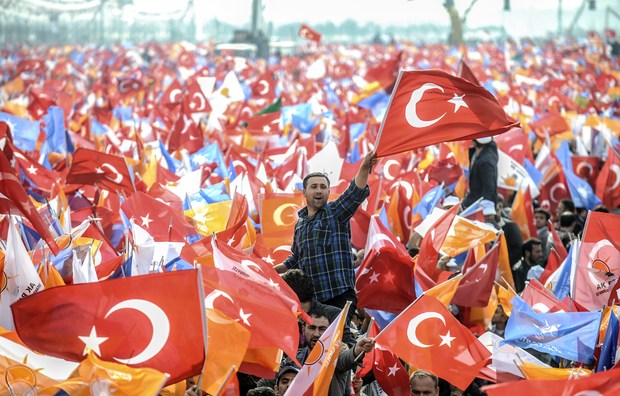 The situation in Turkey brings a question back to the center for consideration: are Islam and Liberal Democracy compatible? For those who answer yes, the country in Asia Minor has long been a shining example that both these schools of thought and ways of life can coexist. But such an answer was muddled when the Republic’s founder Atatürk had the intention to push Islam as far as possible out of the public sphere and individual private life. A more Westernized way of living and thinking corresponded less to an Arabic and thus to Islamic culture, thus for Ataturk reform was never about blending together the two traditions 50-50. No way.

The undertaking failed in Atatürk’s own lifetime: the call to prayer continued to be sung in Arabic and not, as he had arranged, in Turkish. Religion, he learned, was such an important constant for the people of Anatolia that he could not abolish it altogether. Learning through trial and error, he settled for the fact that religion should at least be modernized. The Faculty of Theology at the University of Ankara would train imams and religious scholars who accepted and taught a new, modern interpretation of the tradition and the holy texts.

A turn to the West, as Atatürk envisioned, was associated with a shift away from the ancestral lifestyle. Similar to Peter the Great’s Russia, where there cultural fights over long beards and traditional costumes, which were dismissed for being un-European, in Turkey old-fashioned Arab-Islamic braids were cut. That was what it meant to be “Western”: neither in Atatürk’s time nor Peter’s time had it anything to do with liberal Democracy. The allure of Europe in these times were tied to something artificial: for the lands on the borders of Europe, economic and military progress and success was connected to a certain cultural affect and fashion. This advertising is no stranger to Western Europe: in the second half of the Twentieth Century, British music, and above all American culture, shaped the lives of entire generations. These processes are never linear. One could call it a tug of war one both sides, between tradition and renewal. That is true in Europe to the present day, where in certain circles the US lifestyle is soundly rejected. That was and is true for Turkey, where Atatürk’s model of the secular republic was always met with criticism and opposition.

The two sides, the Kemalist and the religious circles, hate each other. If you were to meet for example today members of the Istanbul elite, you would hear that it would have been better if the Ottomans had taking up Christianity over Islam. Because, as they reason, the religion of Islam will forever be linked to the backwards culture of the Arab world: Atatürk rhetoric at its finest. Herein lies the difference between Turkey and the Russia of Peter the Great: the Turks are Muslims, the Russians Christians. It should in theory be irrelevant for a Liberal Democracy which religions are practiced in it. But it helps if you compare them to each other, when certain issues exhibit common identity features.

Couldn’t it then be said that, in general, Liberal Democracy and religious thought, regardless of its origin, do not go together? Yes, you could. But this animosity between the Islamic and the Western worlds reaches deeper as part of a conflict that goes back 200 years. At the beginning of the Modern Age in the Islamic world, Napoleon’s invasion of Egypt has been enshrined in literature. Although the Emperor of France had no interest in proselytizing the Egyptians, this date of the conquest is considered negative by the Muslim world, and fateful. Everything that the West is, to put it briefly, is seen as foreign and imperialistic. The lifestyle of the West, its freedoms and personal mobility to chose to forge your own destiny, do what you wish with your own body, beyond family and religious customs is seen today throughout the Islamic world as an attack on their way of life and identity.

Regarding the current cultural conflict in Turkey it is no different: just like how Mr. Putin mourns the demise of the Soviet Union, so too does Erdogan cry over the end of the Ottoman Empire, whose land was carved up by the Europeans, and the rest is, sadly, history. Erdogan and his inner power circle have reintroduced the narrative of the Ottoman Empire and its Sultan into the Turkish consciousness. From the depths of history to the present day explains what is right now happening in Turkey: the Islamic World, indeed the whole world has lost its only example of how a Liberal Democracy and Islam can go together. Therein lies the whole tragedy: as of today, the Islamic world from Nigeria to Pakistan is in turmoil and war. In a nutshell it is the conflict between tradition and modernity, which in Europe has lost religion. At the moment it is a point of victory for the traditional powers, with the consequence of a caged and castrated youth in Iran and elsewhere. Turkey was a hope. This hope is dead.

The question of whether Islam and Liberal Democracy are compatible is one that’s poorly constructed: neither Islam nor Christianity in their pure doctrinal nature are compatible with Liberal Democracy. The crucial question is whether Liberal Democracy as a life model is more attractive than a religiously imagined world. That has been the case in the West for the past seventy years or so, but the future is from here uncertain. What right now is true is that in the Islamic world, liberal democratic life concept cannot flourish.