We must distance ourselves from the Le Pens and the Trumps

At least since the Apollo 8 mission humanity has known there’s no difference between races or religions. Trump, Le Pen, and co. are reverting back to the old ways with their bigotry. 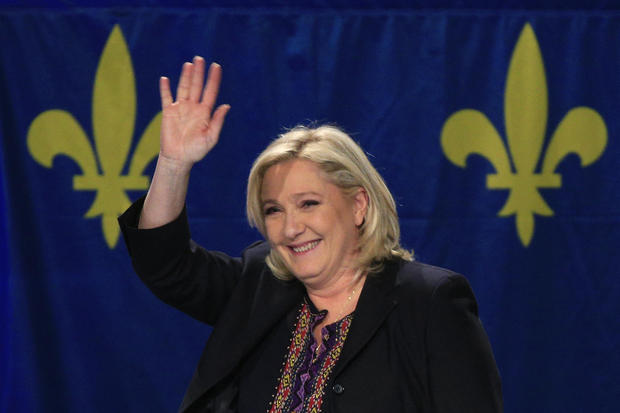 In 1968, the photos of the earth from space taken by the Apollo 8 became famous worldwide, and since then the division of earthlings into groups of “us” and “them” have become totally nonsensical. At the moment they were published, the global community encountered the sight of their blue planet, their home, for the first time.

For those who were born after, this perspective from outside part has always been a part of their understanding of the world. The view from the universe down on earth has become today a commodity, a consumer good, a mass-produced product, a matter-of-course.

Should a god from a holy distance really look at his creatures and separate them by continent, skin color, language, or religion? What the Enlightenment thinkers had always been suspicious of about religion has now been made manifest in a photo: the border drawing of orthodoxy of different religious denominations, in the face of the fragility of our planet, not the purpose of this creator.

At the beginning of the European Enlightenment, the religious critic and philosopher Baruch de Spinoza divided the possibilities of examining the world in two ways: from the perspective of temporality (sub specie durationis) and from that of eternity (sub specie aetemitatis).

There’s no difference between people

The reference to eternity is not a religious ferment here. Rather, it puts people in the place of God, from where he regards things not just in the concrete, daily comings and goings, but rather by a near divine perspective, where all connections can be laid open and possessed.

That is the perspective of modern science, which articulates abundantly clear that Homo sapiens everywhere in the world are made from, we say with Spinoza, the very same substance, such that there is no race, no differences in blood or genetics.

What we are witnessing with the right movements at the moment in the United States, France, Germany, England, and Poland, to name a few examples, is no less than the negation of these facts: namely that we all, from the lens that took the Apollo 8 photos, clearly belong to a human family that is able to formulate a common ethic, a common humanism, and a common responsibility for the future of the earth.

In contrast to this, when Donald Trump talks about making America great again, and Ms. Le Pen makes promises to voters with a similar rhetoric: to restore the glory of France, then both do nothing more than reduce and narrow the perspective for themselves and their voters, from a greater to a smaller scale. This is a masquerade and a farce, because the world is just that which is the case and not as just they would like.

Trump stands in a quagmire

One of the potential Democratic candidates for the position of US president, Bernie Sanders, pointed out in a negative response to the recent outrageous remarks of his Republican opponent Donald Trump against Muslims that he was merely trying to win votes with sharp discrimination against the alleged enemy. One cannot descend deeper into the “sub specie durationis” quagmire.

The coming together around a common goal, however, which indeed corresponds to the bird’s eye view in the philosophy of Spinoza, like with Sanders, is lagging behind. And so the prudent part of the Western public must look on as the divisions between “them” and “us” grow more and more popular and powerful.

How then shall the glory of France look if its borders were to close and the country was to no longer a member of the EU? What “glory” is Ms. Le Pen even dreaming of – that of the brutal French colonial Empire?

The same question can be addressed to England: how would they want to exist in the world without partners in Europe, partitioned off on their island? The Polish are spicing up their new nationalist trend still with something akin to Clerical-fascism. One can deduce that the aforementioned countries are drawing back towards the nation state, which constitutes nothing but creeping back into the uterus of the 19th century. It’s as though everyone wants to be back at a level of knowledge and in the range of motion of that time.

Evil spirits from the bottle

The rhetoric of discrimination, which sprouted up in different places and with different levels of intensity in many Western countries after the attacks on September 11th, 2001, has become a full-blown ideological rejection of Muslims, which breeds human contempt and above all else the potential to exterminate human life, and it’s concealing itself behind other dangerous ideologies like that of ISIS.

By contrast, in the US there has formed a “Fight against the Right” movement, whose protagonists are distancing themselves from Donald Trump. Yes, it has come has come so far in the West: just like how we demand Muslims to face up to Al-Qaida, ISIS, and Boko-Haram, we must distance ourselves all the same from the Trumps, Le Pens, Höckes, and from whatever other names they may go by. He who brings forth the nation and religion our from the poison cabinet of history, in order to once again pit man against man, releases from the bottle both the evil spirits that so often ravaged the Old World.

We want our children in German schools to ask how a movement like Fascism could emerge, how it could claim millions of human lives, and how it could leave the world a mentally and spiritually empty expanse of rubble. We are experiencing its return and are encouraged not to repeat the mistakes of the past.

From the perspective beyond time, it is evident that the ones who campaign against foreigners will score a few cheap victories. Those who take part in this are marching voluntarily into lives under a rock, hiding themselves from a shared view of the moon and the stars. How can one be so blind to the mission that took us up there and gave us photos of our common earth and that of the whole human race?