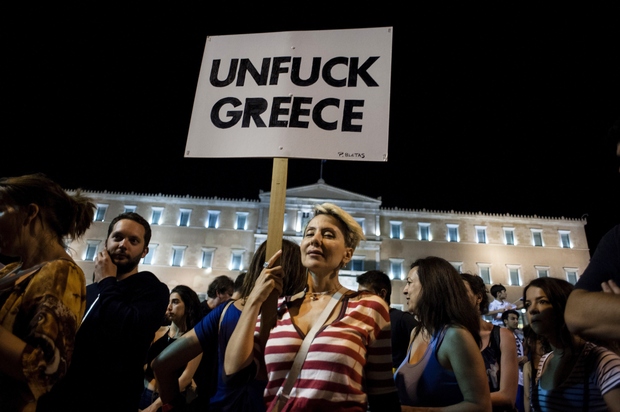 Two minutes from Syntagma Sqaure, a (great) Greek journalist observes to me: “I don’t care about politics. I am a Leo. I care about my wife and my daughter. I care about sex and I care about my life. Last week my newspaper told me they would not pay me until after the referendum. I don’t know if they will ever pay me. Of course, I voted yes. If they do not pay me, my life is over.“

I paraphrase from memory, but the essence is correct and not at all melodramatized. And I endorse his position. Frankly, in the same circumstances, it might well be mine. Despite of this, as a country, Greece demonstrated more backbone than him or me.

This was not about economic visions

So let us be clear what just happened. A series of foreign governments and an unelected supranational body attempted to impose their will on the people of a sovereign state, and attempted to bring down its democratically elected government. And they lost. This is something all of us should celebrate.

Inevitably, attempts at balance will suggest that this referendum was about differing economic visions. It was not. Who in Europe, even among those who would like see Syriza crushed, truly believe that further austerity will help Greece? Let them put their hands up, let them write hyphens and their names after the statement, “I believe austerity can help a crippled economy”, pin that statement somewhere we can all see it, and let us never again take seriously their judgement. This is one of only two viable courses of action; the other is to assume the disingenuousness of the austerians, and that (heaven forbid!) they never really wanted Greece to get well. “First they used tanks, now they use banks,”reads Athenian artist Cacao’s famous graffiti. Greece showed it was scared of neither.

Yet in Syntagma Square (despite the reports of German newspapers) the celebration is muted. When the inevitable array of over-excitable idiot foreigners dance and yell, they do not blend in. Everyone who has endured recognizes that their plight has not been improved. This, precisely, is what makes Greece’s choice so exceptional. Tomorrow it is likely that their €60 withdrawal limits will become €40. The banks may well close altogether if the ECB elects to continue withholding emergency financing. And no one – truly no-one – is under any illusions about this. Yet they rejected the absurd terms of the Troika all the same.

The choice Greece made tonight was never intended to be a choice. Samaras and all the other grey old men who presided over Greece’s descent into this mire understood this: they were put in power – and not by the Greek people! – to implement decisions, not to make them. Syriza’s greatest triumph was to lead the Greek people to a point where they could choose their destiny: whether to fight a struggle that still may well prove unwinnable, but is unquestionably the side of free men, or whether to capitulate. One could not have blamed the Greek people had they chosen the latter. Were a free vote held in Vichy in 1943, Pétain would have received a YES. But Greece chose absolute ethics over ‘pragmatism’.

Over the days to come, the Greek referendum’s result will become a fact. But a day ago, it was assumed and priced in that the demos would lose (or, more precisely, surrender). For the benefit of history, then, let’s be clear what was avoided. A Nai vote would have entailed:

The position of the Good and the Right

Can the will of a country’s people still matter? The last decade has thrown up countless examples to show that it doesn’t, of which the crushing of the democratic movements in Georgia (by Russia) and in Hong Kong (by China) are among the more obvious. The only significant difference between these actions and the (admittedly more “polite”) EU’s attempt to crush Greece over the last 6 months, and particularly over the last week, is that the EU lost.

Life in Greece will not be better tomorrow. It may not be better for years. Greece’s position tonight was only, and precisely, the position of the Good and the Right.

In short, the bravery of the Greek people defies imagination. What other country would have unblinkingly walked into such a firing line to defend the rights of the poor of European countries to eat, of the old of European countries not to be abandoned the moment they lose their economic value. These, explicitly, are the things the EU and the IMF wanted them to forsake. And they said Oxi. Greece took a bullet for the rest of us.

The possibility of a “Europe” worth dreaming of was saved, for sure. But Europe didn’t save itself. And Greece will be executed again, and again and again over the days and weeks to come.

The values Greece defended should, surely, be the values of all civilized people. Over the days and months to come, then, who will stand up for Greece as they stood up for us?

Adam Donen was in Syntagma Square for the announcement of the referendum results. He is a composer and poet. Born into a revolutionary ANC family in South Africa, he now divides his time between London and Berlin. His forthcoming Symphony to a Lost Generation, juxtaposing the young who lived through Wprld War 1 with those in present day Europe, premieres in the UK next January, performed by the Vienna Philharmonic Choir and Lithuanian State Symphony Orchestra, before touring the rest of Europe.